Bathroom Remodel in Oxfordshire in Epwell project. Customer requested bathroom to be moved to adjoining wall to create more space and to close off one of the two doors that had access to the bathroom.  We also planned replacement of goods in same positions, but a new tiled floor and modernised fittings would give it a fresh new look.

This is where we began: 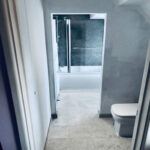 The new bathroom after tiling floor and fitting new units and splash back, the final coat of paint and we are done:

Close up shot of the new bath, radiator, bath screen, and tiling in Epwell, Oxfordshire also fitted new mains fed shower and blocked off a second door, which was where the radiator is now.

Whether a private household, landlord or agent we are happy to provide you with the above services, and can also offer competitively priced Gas Safety and Landlord Certificates to ensure you meet current legal requirements.